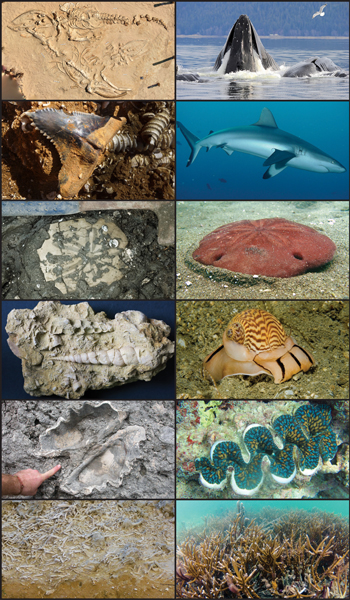 SACKVILLE, NB — Mount Allison University geography and environment professor Dr. Zoe Finkel is part of an international group of researchers looking to fossils to help identify marine animals and areas of the ocean with a higher risk of extinction. The group’s paper has been published in the journal Science.

Finkel, who is also the Canada Research Chair in Marine Environmental Ecology and has co-ordinated the Environmental Science program at Mount Allison, says that the fossil record provides information on the susceptibility of specific organisms to extinction and guidance regarding species and regions that require extra conservation efforts.

“Using fossil records spanning the last 20-million years, we were able to estimate extinction risk over different ocean regions,” she says. “We were able to create a map that identifies hotspots in the ocean where there is both high natural extinction risk in species like sharks and marine mammals and identifies areas where humans are causing stress due to fishing pressure and climate change”

While extinctions are a natural phenomenon, researchers are seeking to understand how they are affected by, and affect humans.

“Oceans provide a livelihood for many around the world and regulate our climate,” says Finkel. “We hope our work will provide some insight into the changes ocean life is enduring and inform future conservation efforts and management strategies.”

Co-authors include researchers from Canada, the US, and Australia, including from the United Nations Environment Program World Conservation Monitoring Center, the Computational Science and Laboratory of Microsoft Research in Cambridge, the Smithsonian Tropical Research Institute in Panama, University of California (Berkeley), Simon Fraser University, Dalhousie University, University of Massachusetts, University of Oslo, University of Washington, the College of William and Mary in Williamsburg, VA, and the University of Queensland.